The Grail values justice and works to transform the world by networking, education and action. Grail members work to promote peace and justice locally and nationally by being involved in International Grail networks and through our NGO status with the United Nations. 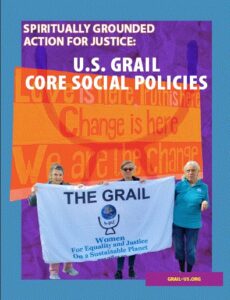 In 2020, Grail members voted to accept the following Social Justice Policies in accordance with its vision and mission statements, to encourage members and non-members to take action towards achieving The Grail’s mission goals.

THE CREW at the Grail

Look here for more information about applying in March.

We focus on student led education and helping young women find their voices and embrace their untapped capabilities. Including weekly themes, once a week education hours, and an earlier starting date in mid-May.

Young women ages 15-22 who have a financial need are hired as contractors at $15/hour, and can decide what days and hours they prefer to work each week. Usually the focus is on outdoor tasks such as, maintain gardens, weed trails, maintain bird feeders, etc..  This can also include some office work, event staffing, and archival/art collections help as it is needed.

Email volunteer@grail-us.org with any questions about our CREW program!

The Grail in the US is a movement which means that our members share values but may sometimes differ on priorities. There are some moments where unification is paramount, and at such times we as The Grail in the US choose to Take a Stand which means statements, sign-ons and actions can be taken by local, regional or national Grail groups without further vote if they are within the parameters of the policy statement.

The PPC is organized by state committees, which take local actions, as well as national gatherings. The campaign was launched in 2018 with 40 days of action and mass civil disobedience.  Several Grail members did civil disobedience in Washington DC or state capitols as part of the Campaign.  In June 2019 the Campaign held its first national meeting, and endorsed a Poor People’s Moral Budget  https://www.poorpeoplescampaign.org/resource/poor-peoples-moral-budget/ Outlining an advocacy agenda for the movement.  Carol Barton and Carol Skyrm attended this meeting.

The citations in this text come from PCC statements.

* for clarification; this summary begins the multi-page policy on taking a stand

The Grail in the United States affirms the following:

We call on US Grail members to:

Statements, sign-ons and actions can be taken by local, regional or national Grail groups without further vote if they are within the parameters of this policy statement.

The Grail in the United States joins the rest of the world in condemning the assassination of Berta Cáceres, co-founder of COPINH (Civic Council of Grassroots and Indigenous Organizations of Honduras). Our Sisters in Honduras worked together with her in the struggles to preserve the environment, indigenous and feminist rights and the return to democracy in Honduras after the 2009 military coup. She inspired them with her unrelenting commitment to the indigenous people of Honduras, her courage, creativity, leadership, humility and deep spirituality. For this reason, her death strikes us personally, and we are deeply saddened as well as enraged. It is also a dire setback in terms of social movements in Honduras, where murders of community leaders are frequent, and a global leader like Berta cannot be protected.
An indigenous leader from the Lenca community, Berta has been one of the leaders fighting the Agua Zarca Dam, a project imposed on the Lenca without prior consent, in violation of ILO Convention 169. She fought against World Bank funding of an earlier dam project and against the U.S.-trained and -supported Honduran coup in 2009. She did this work despite repeated threats on her life and the
lives of her family.
She was recognized around the world for her leadership, and received the Goldman Environmental Prize in 2015. Through her efforts, the Lenca community were able to temporarily halt the construction of the dam, although construction is again underway. A Lenca road block to halt the dam has recently led to a tense stand-off between the community, police and the military. We grieve the loss of an amazing fighter who was an inspiration to many, and we pledge to keep organizing in her memory. She fought for life, for land, for dignity, for happiness!
The United States played a significant role in the 2009 coup which opened the way for an intensification of corporate extraction projects. The U.S. has also played a role in backing a heavily militarized Honduran government and training the elite “Los Tigres” military squad at the School of the Americas, creating the conditions for repression against activists protecting their communities.
We are profoundly concerned that the U.S. Agency for International Development (USAID) has partnered with internationally financed Honduran company, D.E.S.A.’s Social Investment Programming, through the MERCADO project, linking U.S. taxpayer dollars to the repression and violence against COPINH. We strongly condemn the role in Rio Blanco of Los TIGRES in defending
the private interests of D.E.S.A.
We ask that all concerned people send a message to the Honduran embassies and government, the Organization of American States, the U.S. government and the United Nations calling for an investigation and denouncing this and other assassinations of other human rights defenders of COPINH and Honduras. We recognize the role of the U.S. in backing a heavily militarized Honduras and creating the conditions for repression against activists protecting their communities.

We call on the Honduran government to act immediately for:

We call on the U.S. government to:

We condemn the patriarchy, endemic corruption, racism and militarized capitalism that have escalated in Honduras since the 2009 coup. Forces of evil cannot extinguish such a beautiful spirit. She is now part of the rivers, the mountains, and the forests that she defended so well. We will continue her struggles for women, for land, water and indigenous rights throughout the Americas. We are all Berta. Ella no murió, se multiplicó.

As The Grail in the US we actively advance the 17 United Nations Sustainable Development Goals at all levels but most importantly by educating folks at the local and grassroots level about their existence and how even one small act can make a difference. You can help by sharing what you do on a daily basis to make this world a better place for the future: #USGrailGoals

We can't do it without your support.  There are many ways to donate to The Grail US.

There are a variety of opportunities for all ages, skill levels and interest.

The Grail in the US is a movement where all members are encouraged to advance our shared vision in the manner that best befits their interests, abilities and the needs of their community. We are individual threads that together weave a tapestry.

Any cookies that may not be particularly necessary for the website to function and is used specifically to collect user personal data via analytics, ads, other embedded contents are termed as non-necessary cookies. It is mandatory to procure user consent prior to running these cookies on your website.

Analytical cookies are used to understand how visitors interact with the website. These cookies help provide information on metrics the number of visitors, bounce rate, traffic source, etc.

Performance cookies are used to understand and analyze the key performance indexes of the website which helps in delivering a better user experience for the visitors.

Advertisement cookies are used to provide visitors with relevant ads and marketing campaigns. These cookies track visitors across websites and collect information to provide customized ads.